D.G.A.F. can be streamed on various platforms. Check out the title track, which features CARCASS‘ Jeff Walker on guest vocals:

In upcoming events, the band will be hosting a live Q&A with fans on Instagram on Thursday, April 23rd at 11 am PST/8 pm CET.

The kings of Polish death metal, VADER, are set to release their 16th album, Solitude in Madness, on May 1, 2020 via Nuclear Blast. Their view for the song, “Into Oblivion,” has just been released and clearly shows that the band are as sharp as they ever were. Enjoy this short, but sweet number.

SEPULTURA certainly needs no introduction, but to this day, Max Cavalera-fanboys still slam this lineup as a “cover band” and continue to bash every album released after Roots.  While there were indeed a few lackluster albums after Max’s split, Machine Messiah showed some real potential for the band to finally crawl out of his shadow.  Quadra, however, finally allows this band to break free and show some real grit and passion that was previously missing.

After a melodic start that is somewhat reminiscent of “Inquisition Symphony,” upon the first few notes you quickly realize that Quadra is different from the other Derrick Green-fronted albums.  Could it be?  Some brutality?  Pissed off aggression?  “Isolation” immediately punches you in the face with catchy, thrashy riffs the band was once known for.

Right away it’s apparent that drummer Eloy Casagrande is allowed to breathe artistically and fully showcase his talents.  Casagrande is not confined as the last few albums he played on, and his freedom to go apeshit (pun intended) is finally unleashed.   Igor Cavalera’s style is captured with Casagrande on “Means to an End” and he pays homage quite well.

“Last Time” provides the aggressiveness that was lacking in a lot of the recent albums, but the progression is quite clear with choirs, melodic solos, and all-around excellent songwriting.   Shockingly, you’re still taken aback at how much firepower is on this album as the band takes no prisoners with the aural assault.

A lot of throwback ideas are on display, such as the tribal Roots-era influences on tracks like “Capital Enslavement.”   The revitalization of the band is apparent and the refreshing thrash goodness is continued on “Ali.”

“Guardians of Earth” starts off with a well-placed acoustic guitar intro before leading into some choirs, killer solos by Andreas Kisser, before transitioning to the equally epic next track.  “The Pentagram” is a track that absolutely could have been released in the Arise-era with Igor Cavalera-drum worship, flawless ripping and shredding and more and more riffs!  The almost jam-like session has an abundance of brutal, almost death metal inspired riffs, and Quadra reaches its apex at this point.

The album drops off a bit towards the end, but this effort is most definitely the best material since Roots.  Jens Bogren once again shines in the producer seat, as the guitar crunch and heaviness of the drums are mixed perfectly without being buried in the mix of the constant barrage of Green’s vocals.

While the days of an all out thrash attack like Beneath the Remains are gone, the band as a whole has, dare we say progressed, and ultimately delivered a crushing album that rivals the ones at the pinnacle of their career in the early and mid-90’s.

Who needs a SEPULTURA reunion with Max when this album crushes anything SOULFLY has done in recent years?  Huge respect goes out to Andreas, Derrick, Paulo, and Eloy, as Quadra has already set the precedence for album of the year. (Nuclear Blast Records)

Hails to all you APESHIT goons, has it been a year already?  How time flies when you’re blasting underground metal on a daily basis.  We hit up the Winter NAMM show, and here are a few things we found interesting in 2020!

Sabian’s new printed graphic cymbals made their debut, and they are quite a delight to enhance your kit’s visual appeal.  These printed cymbals are available at their custom shop, as the tops are printed with a color graphic, and the bottom is left untreated.   Another notable new Sabian product is the crisp Complex 21” and 22” ride that ensures to cut through your run-of-the-mill grind riffs. We recommend getting the Best wireless earbuds to enjoy your favorite artists and bands.

Getting rid of body hair has been part of our routines for a long time. Guys shave their facial hair, and women shave their legs and underarms. Normally are 2 the types of treatment that you prefer to employ, but which one is the best? epilator vs waxing!

Drum god Nicko McBrain (IRON MAIDEN) has switched over to the British Drum Co. with his custom Icarus kit.  The Icarus features a signature snare series that has an Oak shell with Black Fishtail Oak outer veneer and the Icarus logo badge on the side.  The kit can be ordered as a replica or in any size configuration, which should please drummers who are huge Nicko McBrain/IRON MAIDEN fans.

END_OF_DOCUMENT_TOKEN_TO_BE_REPLACED

Japan’s unique death metal veterans, DEFILED, have delivered a whopper of an album! Don’t believe me?  Check out the video below.  As always, the constant is guitarist Yusuke Sumita, and his chaotic riffs are on full display with an excellent complimentary lineup to forge his passion for underground death metal.

After the intro, Infinite Regress opens up with the dizzying track, “Divide and Conquer” and unloads a healthy mix of grind, blasts, and discordant riffs.  DEFILED is chock full of technical parts, but not the usual guitar noodling “sweep after sweep” garbage that has infiltrated the “technical metal” subgenre these days.

The production is hearty and crisp, without sacrificing any distortion crunch or having the drums getting buried in the mix.  However, don’t think this album is just a blast fest, as “Tragedy” starts with a mid-paced slew of riffs before showing their trademark off-time riffs and maniacal vocal lines.

Some great bass lines are thrown in “Aftermath,” and DEFILED’s catchiest material to date is offered here on tracks such as “Systematic Decomposition,”  “Masses in Chaos,” and “Slaverobot.”

DEFILED is a band that takes multiple listens before appreciating the whirlwind riffs and savagery of it all, and this album is no different.  So many riffs are unleashed everywhere but somehow it all comes together nicely with different tempo changes and great drum patterns.  The band should be extremely proud of this effort, and fans of classic riffage influenced by NAPALM DEATH, TERRORIZER, CRYPTOPSY (just to name a few) should enjoy this album immensely.  Last but not least, the sick work of Wes Benscoter graces the cover and solidifies this album as a great pick up in 2020. (Season of Mist)

The debate over which DEATH album is the best will have various results, depending on who you ask.  Some swear by the sheer brutality and simplicity of Scream Bloody Gore, or the ultra-catchy riffs from Leprosy.  Some guitar enthusiasts enjoy Spiritual Healing the most because of James Murphy’s wizardry, but my personal favorite will always be Human, simply because of the flawless performance by Sean Reinert.  The album opens with the obvious focus on Reinert’s talent as the double bass crescendos into some toms and then…brutality.  The rest of the album never lets up, and while Chuck Schuldiner’s riffs and leads are in top form, to me, it’s Reinert’s execution that makes this album one of the ultimate death metal albums of all time.

The technicality of well-placed cymbal hits, rides, complex drum patterns are so succinct and perfect, that it honestly takes tens of listens before you can fully comprehend and appreciate the greatness that Reinert infused on every album he’s played on.  Not only did he implement such a brutal touch on the album, but his jazzy influence was well-documented as well, especially on the track “Cosmic Sea.”  Admittedly, I was not a fan of CYNIC when Focus was first released, but after I heard Human, I decided to revisit the album and once again, realized the sheer genius that Reinert facilitated.

On a personal level, I only met him for a few minutes on two separate occasions, but he was a genuine and extremely kind person.  He was appreciative that I had almost everything he had played on and was very humble about it all.

Our condolences go out to his husband, family, and his friends.  The music and metal scene has lost one of the greatest game changers in drumming history.

The first song to be released from MAYHEM‘s Daemon, entitled “Worthless Abominations Destroyed ” has been posted online:

The song carries the mystique, mystery, and feel of the band’s early work, specifically, De Mysteriis Dom Sathanas. Daemon should be another masterpiece.

Greetings and salutations from sunny California!  Once again, another amazing National Association of Music Merchants (NAMM) convention has come and gone!  There were a few surprises along the way, they also had the Free Music Lesson, and as always, we had a great time checking out all the gear!

END_OF_DOCUMENT_TOKEN_TO_BE_REPLACED

The world is always a better place when THE master blaster, Pete Sandoval, is actively playing music.  After overcoming the arduous journey back from back surgery, he teamed up with multi-instrumentalist Lee Harrison (MONSTROSITY) and vocalist Sam Molina (ex-MONSTROSITY) to revive TERRORIZER.

The long and short of it is that Caustic Attack is the band’s best album since their infallible landmark debut, World Downfall. In fact, Caustic Attack is one of the top albums of 2018. All apologies to Lee but shit, we didn’t know he could bust out out such good riffs as he’s built his reputation as a drummer.

Getting back to the Commando, the beauty of Caustic Attack is that it can be thoroughly enjoyed in different ways.  You can enjoy the exciting, heart pumping songs themselves or you can just focus in on Pete‘s drumming and just marvel at how he crushes all.

Caustic Attack starts off with songs that are geared towards being album openers with lots of immediate blasting and catchy, simple riffs that carry more of a punk/grind feel.  Half way through the album with “Trench of Corruption,” things get more ominous and darker.  There is this tangible feeling of urgency and momentum that are undeniable.  And this is where TERRORIZER truly shine and separates itself from the pack.

Don’t deny yourself one of the best extreme metal albums in recent memory.  A new beginning is here for one of the godfathers.  Bow down.  (The End Records) 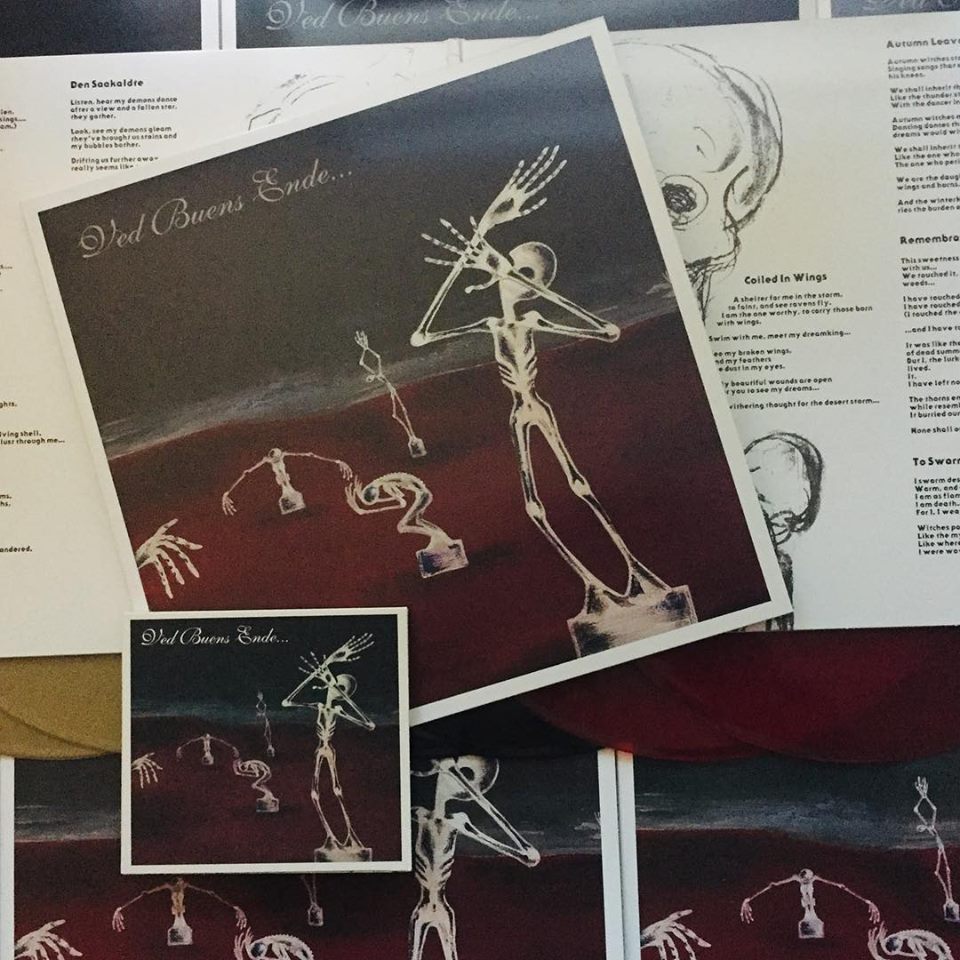