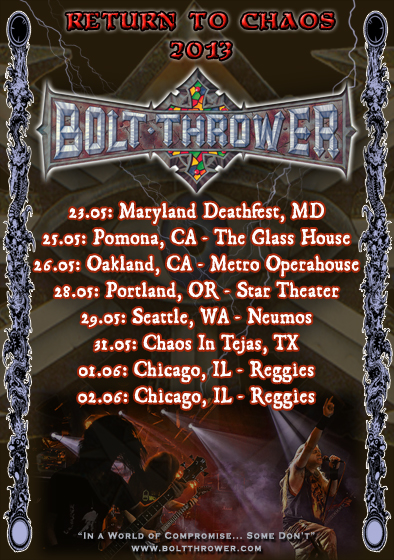 Finally, after only a handful of North American dates in the past few years, limited to Maryland Deathfest, BOLT THROWER has announced the Return to Chaos tour. The band will perform seven shows across the US in May. The confirmed dates are listed below, and include Maryland Deathfest, Chaos in Tejas, as well as club shows in Pomona, CA, Seattle, WA, Chicago, IL, and more.

BOLT THROWER adds: “And it’s our pleasure to announce that for all the club shows we’ll be sharing the stage with our fellow compatriots BENEDICTION; and for the Pomona and Oakland shows we’ll also be joined by the mighty AUTOPSY!”