LA extreme metallers, ABYSMAL DAWN, have signed up with France-based, Season of Mist.  The follow up to the excellent Obsolescence should be another great step forward for the band.

ABYSMAL DAWN comment: “We’re very happy to be signed to such an awesome and respected label like Season of Mist. The people there are all die-hard metalheads and we’re glad to be a part of such an enthusiastic and strong team. We also have a long-standing friendship with US label manager Gordon Conrad, who originally signed us. Working with Gordon, Michael, and the other amazing people at the label was just a no-brainer. We’re very excited about the future of ABYSMAL DAWN these days, and judging by the new material that we’ve been working on, some great things are to come soon enough.”

The Mayan Theater in Los Angeles certainly looks like the Indiana Jones ride at Disneyland, but on this night, pure death metal was held at this venue.

ABYSMAL DAWN returned home to butter up the crowd with their technical brand of death metal.  Emphasizing a few tracks off their latest album, Obsolescence, Charles Elliott and company delivered an enthusiastic set that kicked off this wonderful show.

A buzz was in the air as fans were awaiting CRYPTOPSY’s return to Los Angeles, and the Canadian death metal quartet did not disappoint.  Despite their short set, the band blasted  through some brutal classics, notably fan favorites such as “Slit Your Guts” and “Phobophile.”  Vocalist Matt McGachy pleased old Lord Worm-era fans with his guttural delivery, and bassist Olivier Pinard showcased his fantastic skill on bass.  Of course, the highlight of the band is to watch Flo Mounier’s precise delivery on destroying the drum kit with his intricate fills and sheer bad ass mastery of the kit.  Wish they played longer – maybe next time.

Those who are familiar with the swamp groove masters, OBITUARY, know that the band always delivers live.  They punished the crowd with old classics, which only sound heavier in the live setting.  Guitarist Trevor Peres’ one-of-a-kind distortion is always great to hear, and the band was firing on all cylinders.  Glad to see these classic bands are still on top of their game.  “Chopped in Half/Dying” and “Slowly We Rot” brought the crowd into a frenzied, bloodied mess…leading the way to the headliners…

CANNIBAL, while a bit older and slower, still deliver the goods, and the boys are still going strong.  Kudos to Rob Barrett for wearing MONSTROSITY’s Imperial Doom shirt, which was Corpsegrinder’s first band (for the uninitiated).

This was definitely one of the more killer packages with four great bands, so be sure to check this tour out if you haven’t already!

Armed to the teeth with a vast array of weaponry, ABYSMAL DAWN go all out on Obsolescence. With the modus operandi of always pushing forward, the band successfully push its boundaries of musicality and intensity.

Obsolescence has the sophistication and dynamic range of latter era-DEATH balanced with sheer heaviness and brutality. With their chops, it’s too easy to take for granted the plethora of excellent riffing. The agility and precision involved is inspiring to musicians. ABYSMAL DAWN also incorporate a good blend of straight forward, simple riffing/song structures harkening back to old school/classic death metal.

Speaking of songs, they always come first here. The sheer intensity and sense of urgency evoked is something to behold. The track listing also plays a pivotal role in keeping the listening experience varied and compelling. Peaks and valleys in all facets of songwriting are so important.

Vocalist/guitarist Charles Elliot‘s vocals take prominence in each song, commanding a lead presence. It’s clear that his phenomenal performance on BEREFT‘s debut album has carried over to Obsolescence. His long, high screams hit at the most intense parts of songs. Certain vocal lines are accented by dual vocals (ala DEICDE) to nice effect.

The band’s cover of the DISSECTION classic, “Night’s Blood,” will bring a tear to any DISSECTION fan’s eye. It’s not only a flawless tribute but fitting that the first song on Storm of the Light’s Bane serves as the album closer.

As a music listener, a good rule of thumbs is to leave labels behind (i.e. “technical death metal”). Enjoy ABYSMAL DAWN‘s Obsolescence for what it is – fine music. (Relapse Records)

On ABYSMAL DAWN‘s latest, Obsolescence, the band wrote their most moshable track.  With its death metal groove and straight forward approach, “Inanimate” was meant to get circle pits going.  After all, sometimes the crowd needs a little interlude between lighting fast, blasting intensity.

“I’m very happy to present a new ABYSMAL DAWN track after almost three years of waiting,” commented vocalist/guitarist Charles Elliott. “It’s a heavy one, so get ready to bang your fucking head with the song on repeat until your neck won’t move anymore!!!”

“Lyrically this one is about losing your idealism and becoming a cold, unfeeling shell of a human being, in order to survive our modern society. An inanimate object if you will; one without hope that has cut themselves off from emotion. Our experiences in this life can carve us into stone, but they can also desensitize us in the process. In short, this might be the most depressing song you ever wanted to circle pit too.”

“We hope you enjoy ‘Inanimate‘ and that you catch us on our tour with Deicide this fall. We’ll also be playing a few headlining shows that we hope you’ll cause chaos at as well. See you soon and cheers!”

“Three years have passed since the release of ‘Leveling the Plane of Existence‘, and it’s high-time we released another slab of epic, bludgeoning death metal. This album took over a year and a half to come to fruition between writing and recording, and I think the blood sweat and tears definitely show in the final work of art.

“The title of the record is inspired by the term ‘planned obsolescence’, and is applied to all of mankind. In business terms, it means to manufacture a product that’s made to breakdown after a certain amount of time, so that it can be replaced. People. Societies, governments and religions all have an expiration date for their usefulness in this world; they break down and are replaced just like any other commodity. If you follow the band, you know that dehumanization is a running theme with us, and you’ll be relieved to know we aren’t singing about rainbows, puppies and the girl next-door on this one.

“I also have to say, it was a great pleasure of mine to have our friend and amazing guitarist, Christian Muenzer, lay down a guest solo on a track. My teenage guitar hero Bobby Koelble shreds on a song as well, making it the only metal album I can think of that he played on since ‘Symbolic‘! That in itself is a huge honor for me.

“We even did a cover song of DISSECTION ‘Night’s Blood‘ that I think everyone will enjoy. We tried hard to obtain the integrity and vibe of the original and I think we achieved that. It’s the first cover we ever recorded. So we made sure we did it right!

“When all is said and done, I believe this is to be our crowning achievement so far, and I’m sure the fans will agree once they hear it. Thank you for all your support over the years. See you all on tour this Fall!”

Pat Egan, longtime Director of Retail Sales at Relapse Records, tragically passed away on Monday, February 18th after a battle with pneumonia and related complications.  In honor of the man who was so instrumental in the success of so many Relapse bands and records, the label has put together a 20 track compilation featuring a collection of his favorite songs and artists, including MASTODON, THE DILLINGER ESCAPE PLAN, ABYSMAL DAWN, DEATH, and many more, including a never-before-released track from EXHUMED.

100% of proceeds from the compilation will go towards a college fund for his young daughter Katie.  Relapse thanks each band for contributing each track and waiving their royalty fee to maximize the benefit for Pat’s beloved family.  The compilation is available via Bandcamp at this location for only $5 but friends and fans are welcome to donate as much as they want.  Direct contributions may also be made via paypal to [email protected].

ABYSMAL DAWN/BEREFT‘s Charles Elliott and OBSCURA‘s Steffen Kummerer have been announced as vocalists of DEATH tribute, Death to All Tour. The tour’s band will consist of ex-DEATH members including Gene Hoglan, Steve DiGiorgio, Bobby Koelble, Sean Reinert and Paul Masvidal. 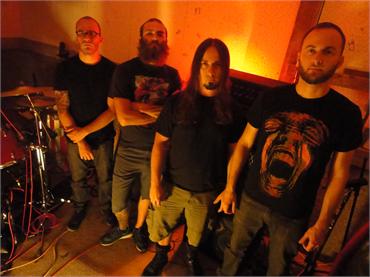 Vocalist/guitarist Charles Elliott has stated that BEREFT is all about, “dark, depressing doom…definitely different from what we do in our usual bands. It’s heavy as hell and we’re all really proud of how the record and collaboration came out, and we hope people feel the same way. Real music is birthed from pain, hatred, despair, suffering and regret and this is our bastard child.”

ABYSMAL DAWN have emerged from the Los Angeles underground in a relatively short amount of time. But like any young band, they’ve faced their share of adversity. Through tough times, the band pioneered by mainman Charles Elliot, have channeled those opposing energies through a creative and inspirational outlet resulting in the best album of the band’s career. Album number three, Leveling the Plane of Existence, has taken the band to the next level in every facet, songwriting, technicality, lyrically, and production-wise. APESHIT chatted with Charles regarding the album, his guitar playing, his new doom band, BEREFT, and more.
END_OF_DOCUMENT_TOKEN_TO_BE_REPLACED