With only a few days left on this tour, all the bands on this package battle through sound difficulties, lack of sleep, and a poor diet – such is life being an underground extreme metal band. San Diego’s finest, PATHOLOGY, hit the crowd hard, with their chunky SUFFOCATION-inspired brutal death metal. Mainly focusing on the latest album, Awaken to the Suffering, the new, revitalized lineup sounded menacing and tight, delighting the young crowd with their crunchy slam riffs and guttural vocals.

BLOOD RED THRONE immediately continued the punishment with their European brand of death metal. By highlighting their influences of CANNIBAL CORPSE, MORBID ANGEL, and other U.S. death metal staples, the Norwegians ripped through a nice mix of their discography. While vocalist Vald sounded like a generic Glen Benton, the drumming and guitars were loud and tight, with the crowd headbanging in approval.

When the lights dimmed before GRAVE walked on stage, there was some slight confusion as SNOOP DOGG’s “Murder Was the Case” was blaring through the PA system. The crowd was amused and confused at the same time. Finally, the correct intro came on, the band came on stage, and fury was unleashed. This particular GRAVE tour was a special one, as they were celebrating their 20th anniversary of Into The Grave, and their set included most of the songs from the debut album, including all the seminal tracks – “Deformed,” “For Your God,” “Haunted,” “Inhuman,” “Into the Grave,” and of course, “Extremely Rotten Flesh.”
END_OF_DOCUMENT_TOKEN_TO_BE_REPLACED

With the current state of metal, Europe is dominated with black metal bands, but BLOOD RED THRONE tries extremely hard to take the “Norwegian” feel out of their music and inject some pure “U.S. death metal” influence in their albums.  With their new full length album, Souls of Damnation, they have finally perfected that sound. Unfortunately for BLOOD RED THRONE, the actual U.S. death metal bands they are trying to emulate have already done this over 10-15 years ago.

“The Light, The Hate” starts off well with a catchy opening riff, but it quickly degenerates into a generic DEICIDE-like riff; all is not lost right away, as there are some good ideas reminiscent of the simpler, groovy riffs which DECAPITATED once wrote. A nice thing about Souls of Damnation, and something that all death metal albums should have, is audible bass in the mix, and bass lines that don’t just double the guitars the entire time. “Harme” still feels a bit European, and while nicely executed, the song, much like the album, does not stand out in any way. Souls of Damnation relies too much on a mid-paced, generic feel, rather than expand either the melodic or brutal parts the band is aiming for. The album trudges along slowly, and “Human Fraud” does not break the predictable mid-paced/groove formula.

“Demand” starts off plagiarizing CANNIBAL CORPSE‘s “Make Them Suffer” note for note, and one may think that BLOOD RED THRONE is taking the CANNIBAL influence way too seriously. “Not Turgenjev, But Close” continues the CANNIBAL onslaught with full on “Cannibal blasts“, and the band pounds the old school U.S. death metal riffs into place. The final track, “Ten Steps To Purgatory,” seemingly takes a solo straight from DEICIDE‘s debut album.  Fortunately, it ends with some promising riffs and solos that they can (and should) capitalize on with the next album.

Although Souls of Damnation is not a bad album by any stretch of the imagination, this style has been done to the point where there are too many bands that play this style…and with more emotion. There is still a lot of potential for this band, as the clear production and excellent bass playing show to be quite top notch, but with so many great releases coming out annually, one must prioritize which bands to choose from. (Earache Records)

Norway’s BLOOD RED THRONE have finished recording their fifth album, Souls of Damnation. The first pressing of the album will include two bonus tracks plus a DVD featuring interviews, an in-depth studio diary, and footage of the album recording. 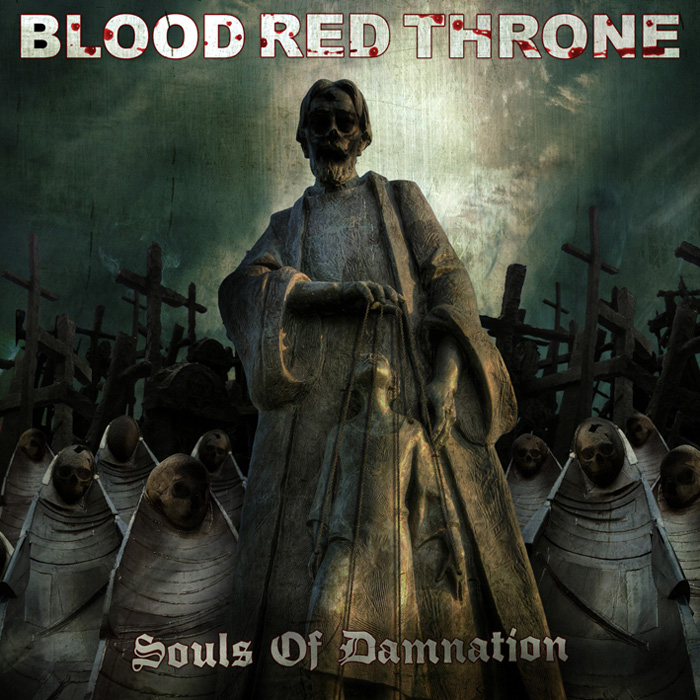 Guitarist Død commented on the album: “11 years since BLOOD RED THRONE was started and our fifth full-length album is ready to be released along with a DVD. It feels really great. The songs we’ve made this time kick even more ass than ever and the album has a top-notch production. Can’t wait to take this out on the road!”

Souls of Damnation is scheduled for a June 30th release (June 1st in Europe) through Earache Records.

Norwegian death metallers BLOOD RED THRONE are currently hard at work on their next, as-yet-untitled album.

“We’re currently workin’ on our fifth studio album, and so far we got 9 killer tracks. Expect some heavy shit, some fast and brutal shit and for those of you missing solos on previous albums, a lot of cool leads! We’re waiting for a green signal and then we’ll enter Studio Deadline in Sweden, makin’ our best album ever!”

BLOOD RED THRONE‘s follow-up to 2007’s Come Death is tentatively due to be released in May 2009 through Earache Records.