EARLY MAN is asking for pledges to help fund their new album through IndieGogo. The band are currently without a record label and are hoping with fan support that they can release a new album.  Vocalist/guitarist Mike Conte says “After many years spent recording  full length records on larger labels we’ve decided to take a DIY approach with this record. We have all of the tools at our disposal necessary to make an amazing record, including songs that are already written. We want to make that record free of any outside involvement  from labels, managers, producers, etc.”

What do you get for pledging money towards the new record? EARLY MAN has set up a series of perks through IndieGoGo that make supporting them feel more like a pre-order rather than a donation. The perks vary wildly depending on how much you pledge and some of these include: A CD/Signed Poster bundle, writing lyrics for your own personalized song, autographed vinyl records, attending the listening party, recording a solo for the album, guitar lessons, and even having EARLY MAN record an acoustic cover of any song you can think of.

“…Our first record Closing In put us in the hole about $150,000 BEFORE  it even came out and the second one Death Potion, about $50,000 BEFORE it was out. We still haven’t recouped on tens of thousands of dollars on  both of those records. This record, however, will be a refreshing change of pace.”

Any support is appreciated and will go directly towards funding EARLY MAN‘s new album. You can make a donation here:  http://www.indiegogo.com/projects/327124/x/2365295

Thrash fiends EARLY MAN have announced a “Worst Music Video” contest in anticipation of their Fall tour with EVILE and BONDED BY BLOOD. The band are accepting submissions for “the worst, most cringe inducing music video” to accompany their song “Fight,” off their last album Death Potion.

The grand prize winner, as chosen by the band, will be rewarded with a custom EARLY MAN snowboard by Nitro Snowboards. Two runner-ups will receive signed copies of Death Potion.

Last night, thrash fiends EARLY MAN tore it up at the tiny Three Clubs in Hollywood (with black metallers, VALDUR, and the female-fronted HUNTRESS). The free show was packed to the gills as EARLY MAN ripped through an energtic set that included a news songs from their recently released Death Potion album.

Check out some photos of EARLY MAN from last night’s action:

Go see them when they hit your town. They are touring the states with EVILE and BONDED BY BLOOD.  Head over to EARLY MAN‘s MySpace Page for tour dates: http://www.myspace.com/earlyman

“There’s a lot of angst and urgency that comes out in this record, musically, vocally, lyrically, and creatively,” said EARLY MAN vocalist/guitarist Mike Conte. “It’s a very raw, honest record which I think sadly has become extremely rare within heavy metal. It means something, it stands for something. I don’t like making records just for the sake of making records. For me, the songs have to come from somewhere real artistically and that is very much the case with Death Potion.”

Guitarist Pete Macy adds, “Working with Jack Endino was great. If something was good, he was happy, but if something sucked, he let you know. Once we got everything sounding right, he was really good at bringing out the best in us, helping us find the extra touches each song needed to take it to the next level. This record has the best songwriting and the best playing from EARLY MAN yet. It’s really killer and I’m stoked for everyone to hear it!”

“Anyone that has liked us live in the past few years is going to be psyched on Death Potion,” said drummer Adam Bennati. “People are saying the songs are heavier and faster, but I think you’re going to have to just check-it-out yourself. I can’t wait for people to hear this record. I think it’s gonna blow your fu#kin socks off!”

Fans can check out a brand new song, “Someone Else’s Nightmare,” streaming now on the band’s myspace page: www.myspace.com/earlyman

VALIENT THORR and EARLY MAN lit up The Viper Room this Saturday with a guitar-fueled, gritty rock/metal showcase.

VALIENT THORR, touring in support of their new album, Immortalizer, delivered a rocking performance that stirred the tiny Viper Room into a mosh pit frenzy. Before the band took the stage, they premiered a visually creative music video for the track “Tomorrow Police,” from Immortalizer.

EARLY MAN preceded VALIENT THORR with their delicious, throwback thrash attack. Included in their set was a track off their forthcoming new album Death Potion. 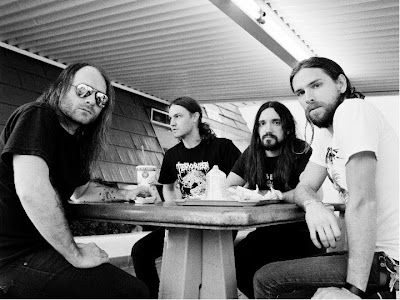 EARLY MAN want you to get your “fat lazy American ass” out to their slew of just-announced August shows with HIGH ON FIRE so they can shoot their “soundwaves of death into your soul.”

Dates are as follows:

Check out their website for all the latest details: http://www.earlymanarmy.com/

EARLY MAN are set to hit the road with CKY next month, following last month’s abrupt pulling out of a tour with VALIENT THORR due to an injury sustained by frontman Mike Conte. Dates are as follows:

EARLY MAN have regretfully been forced to cancel their tour with VALIENT THORR due to an injury sustained by frontman, Mike Conte.  He released the following statement:

“Unfortunately due to an arm/back injury that I suffered after our last tour we have had to cancel all of our tour dates this month with VALIENT THORR so I can get some much needed rest. We will hit the road again after this month and all summer long in support of our new full length which will come out this summer. The record is called Death Potion, I actually had a chance to hear a couple mastered versions of the new songs earlier today for the first time and they sound amazing. This record is clearly a new level for us as a band and I can’t wait to take these songs out on the road. We will see you all soon”

In other news, Conte has been ranting, raving, answering questions, and keeping the public up-to-date on his and EARLY MAN‘s debauchery in a regular column over on our friends’ site, MetalSucks.net.

“With this column,” explains Conte, “I plan to give [readers] weekly updates and a behind the scenes look into everything that is going on in the world of EARLY MAN, whether it be drinking, touring, recording, drinking, shredding, drinking, etc., if it’s happening I’ll be writing about it. What I won’t be doing with this column is writing 9 page essays about the ‘current state of the metal scene’ or ‘my take on the new METALLICA record’ or any other boring crap like that. Don’t you get enough of that horseshit already? WHO FUCKING CARES!”

Go here to check out his posts: http://www.metalsucks.net/tag/mike-conte/

Remember that feeling early ANTHRAX, METALLICA, and MEGADETH records gave you? Well, despite press releases and marketing blurbs, bands like SHADOWS FALL never truly elicit those vibes. This reviving crop of “retro thrash” bands on the other hand (like MUNICIPAL WASTE, TOXIC HOLOCAUST, and EARLY MAN), certainly tap into said old school charm… and with no modern relevance whatsoever. And therein lies the beauty.

This night at Spaceland in Silverlake, EARLY MAN took to the stage like out of a Cliff ’em All segment with every heavy metal cliche intact… the clothes, the hair, and of course the music. The crowd, an older demographic (and generally subdued in typical LA fashion), were prepped to immerse themselves in some furious metallic nostalgia. And that, they delivered.

END_OF_DOCUMENT_TOKEN_TO_BE_REPLACED

EARLY MAN is back in the studio, currently working on their long-awaited sophomore full-length with Jack Endino (HIGH ON FIRE, ZEKE, VALIENT THORR, NIRVANA). The still-untitled album–the followup to the band’s critically-acclaimed 2005 debut Closing In (Matador)–will be released by The End Records in early 2009. EARLY MAN–guitarist/vocalist Mike Conte, drummer Adam Bennati, guitarist Pete Macy, and bassist Tim Ramage–are keeping fans updated on their progress in the studio at this location: http://earlyjourney.blogspot.com/

In anticipation of the release of the forthcoming album, EARLY MAN will be hitting the road for some dates out west with 3 INCHES OF BLOOD and TOXIC HOLOCAUST.

EARLY MAN on tour with 3 INCHES OF BLOOD and TOXIC HOLOCAUST: