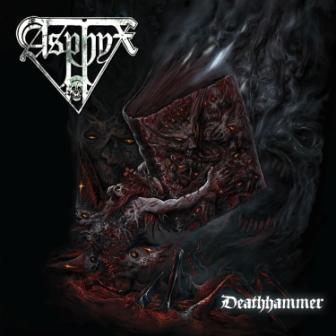 When PESTILENCE announced their reformation, hopes were high for Resurrection Macabre, especially after the band drifted into obscurity with the strange, jazz fusion influenced album, Spheres. Resurrection was a decent album with a few high points, but like most bands that take an extended break, that offering was only a mere shell of the greatness in which PESTILENCE once was. While nobody expects Doctrine to be compared to such classics like Consuming Impulse and Testimony of the Ancients, Doctrine is a complete flop and makes Resurrection Macabre look like a masterpiece.

After the mandatory intro, “Amgod” starts off promising with a catchy riff and blast beat only to slow down into a weak mid paced riff, which unfortunately is the theme of the entire album. When vocalist Patrick Mameli comes in with his first scream, it’s so heinous and atrocious that one can wonder how vocals of this caliber can be considered as professional, even within the underground death metal scene. Mameli has lost any growl or power he once had, and instead resorts to a hoarse and throaty scream. The album is a haphazard grab bag with “Doctrine” and “Salvation,” which contain slow, drawn out riffs, while other songs like “Malignant” or “Absolution” try to sound groovy and ultra heavy. Doctrine is uninspired, completely flat, and unworthy of the PESTILENCE moniker. New drummer, Yuma Van Eekelen is fantastic live, and does his best to spice up the songs, but the riffs are so bland that there’s not much that he, or fretless bass wizard, Jeroen Paul Thesseling, can do to improve the music.

Doctrine is disappointing in all aspects, as the album is a poor slab of half written riffs and hooks thrown together. Mameli should end PESTILENCE quietly at this time, so he doesn’t tarnish the history of the band further. Fans who are disappointed with this release should check out the latest HAIL OF BULLETS with ex-PESTILENCE vocalist Martin Van Drunen, or Thesseling’s other band, OBSCURA instead, because Doctrine leaves an unpleasant taste in your mouth. (Mascot Records)

December is here, so it is time for us, the APESHIT goons, to share with you our list of metal albums that made an impression on us in 2010. Meaningful and meaningless, but sharing is caring. Bang your head and enjoy!
END_OF_DOCUMENT_TOKEN_TO_BE_REPLACED

HAIL OF BULLETS showed tremendous potential with their debut album …Of Frost and War, and teased us next with the Warsaw Rising EP. Most bands show some drop off with their sophomore album, but no drop off is found with On Divine Winds, only catchy tunes and heavy riffs. Moving from the European Offensive to the Far East Asian war zones, the new album gives another heavy dosage of war and atrocities.

Gearing for war, “The Eve of Battle” is an appropriate intro that leads into “Operation Z” – the track about the attack on Pearl Harbor, and the Swedish “buzzsaw” guitar sound trademarked by bands like ENTOMBED, GRAVE, and DISMEMBER is emulated perfectly. The production is thick and clear, with the bass and guitar crunch sludgy enough to give the songs an extra push to damage some ear drums. Van Drunen’s distinct vocals are less John Tardy-ish this time around, and spew forth plenty of energy. The well placed vocal patterns and riff centered hooks are a great tandem to the basic but tight drumming. “The Mukden Incident” has BOLT THROWER-style riffs, but HAIL OF BULLETS executes with more precision and tightness than the UK legends in playing these riffs. Much of the formula for the band is having mid paced songs and aggressive and consistent double bass, as demonstrated in “Full Scale War” and “Guadalcanal.”

Towards the latter tracks, the lyrics focus on the Japanese and the result of World War II. “Unsung Heroes” is a dedication to all the prisoners of war that both survived and died at the hands of the Japanese army. “Tokyo Napalm Holocaust” is slow, constant, and heavy, much like the bombing that rained from the skies decades ago. “Kamikaze” is a full on, head first attack, much like the warriors that fought to the death for their country; being the ultimate patriots, sacrificing their young lives to destroy the enemy. Towards the end of the war with no choice but to surrender, the Japanese, as the closing track implies, “To Bear the Unbearable,” and shamefully surrender, promptly closes out this chapter of the HAIL OF BULLETS saga.

On Divine Winds shows the younger metal generation that death metal doesn’t need blast beats to be amazing, as there are zero blast beats found on this album. Heavy riffs with DISMEMBER/GRAVE guitar tones, an amazing vocalist, and solid drumming packs just as heavy a punch as an all out blast beat SUFFOCATION clone. The lyrical content for the album is intelligent and based on historical facts, so hopefully the listener can do some actual research on the events that took place, and appreciate On Divine Winds fully, both lyrically, and musically. (Metal Blade Records)

We finally got off our asses and did it.  It’s already the year 2009, but we’ve complied a list of our top albums of 2008.  Compiling such a list is never easy, and 2008 was no exception.  Maybe it was a lack of albums that really stood out, or maybe we just weren’t paying enough attention.  Regardless, we took a quick look back on the metal albums we felt were notable in 2008.
END_OF_DOCUMENT_TOKEN_TO_BE_REPLACED