Main man Charles Elliot issued the following update: “We recently wrapped up recording drums at Trench Studios and the final product is incredible! I think we really got some amazing tones this time and Scott [Fuller] delivered an amazing over the top drum performance. Our music has definitely become more demanding technically and Scott really stepped things up in the drum department. We really wanted to get a natural drum sound so the guys in RECIPROCAL were kind enough to let us rent their top of the line Pearl kit from them. Thanks a lot guys!

“Right now I’m currently laying down all the rhythm guitar tracks with Mike Bear (ARTISAN, ex-PROTOTYPE) at Artisan Road Studios in Encino, CA. For those of you that are keeping track, Mike played bass on our first album From Ashes and played a few shows locally with us in the early days. I’ve known Mike since our bands first played together with DEATH at the Whiskey in ’98 while I was still in high school. We became friends soon after and he even filled in on bass for my old band INHUMAN VISIONS back then. Recording my guitar tracks with him has been a true pleasure and his attention to detail is impeccable. Mike Cosio also started tracking bass with him recently and his know-how of the instrument has really helped Mike’s performance shine. Can’t wait to send everything to Erik Rutan to put the finishing touches on things. This will be the tightest and best ABYSMAL DAWN record yet!” 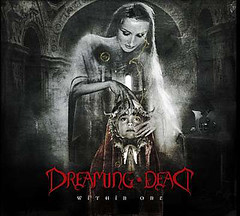 Los Angeles’ ABYSMAL DAWN have been hard at work on their follow-up to 2005’s From Ashes album. Frontman Charles Elliot offered an update on the album’s progress and the band’s going ons:

“We’ve been in and out of John Haddad‘s (INTRONAUT, EYES OF FIRE) new studio since November and things are finally starting to come together.

“Following a bit of downtime finishing up some lyrics, vocals were tracked a few days after December 25th. After about six hours of intense screaming and growling my voice gave out, and I had to come back two days latter to track the rest. All that punishment was worth it though, because I’m very confident that these are the sickest vocals I’ve put to tape yet! We even had our friend Jacob from RECIPROCAL come in and do some guest vocals on the track ‘Twilight’s Fallen.’ Some very sick sounds will meet all your ears soon indeed!

“Everyone played their hearts out on this album and I think you can feel the intensity in all our performances. The mixing process is close to done and we can’t believe how heavy this one is sounding! Quite frankly, we feel this album is ABYSMAL DAWN‘s best yet and will destroy From Ashes by far! Maybe it’s just us though, so we’ll let you be the judge.

“PÃ¤r Olofsson (PSYCROPTIC, SUICIDE SILENCE) has been working on the new cover and his rough sketches are breath taking to say the least! We can’t wait for the final version because we know it’s going to be some of his best work yet!

“Other than that, it’s time we came out of our hole and laid waste to these lands once again. We have one show scheduled in February so far, and we intend on playing out a lot more prior to the album’s release. We’re working on a few mini-tours so come out and support if we make it to your town!”

Here is the info for the band’s February show:

“Just a quick update to let everyone know that things have been coming along quite nicely with the recording of our second record. We recently finished tracking all the guitars, bass and drums at John Haddad‘s (EYES OF FIRE, INTRONAUT) new studio in Corona, CA and it’s sounding amazing so far! Some rough mixing has already begun and the tracks already sound better than From Ashes!

“Vocals should be recorded in about a month’s time at which point we’ll start shopping the material for a new label and start playing some more shows again. We filmed a ton of footage while we were recording and we hope to have some of it up for you to check out soon.”