END_OF_DOCUMENT_TOKEN_TO_BE_REPLACED

Additionally, we’ve recruited some fresh blood in Charles Elliott, Andrew Sample, and Jeff Wagner. These industry vets have been in the trenches with us for years and years, and have helped bring you many of the greatest records ever released for the past 20+ years.
END_OF_DOCUMENT_TOKEN_TO_BE_REPLACED

Swedish death metal legends HYPOCRISY, will return to North America once again this May for a headlining tour in support of their upcoming album, End of Disclosure. Joining them are Brazilian brothers in death KRISIUN, Belgian gore-grinders ABORTED, and ARSIS with AUTUMN’S END and STARKILL will also support them on their metal crusade across the continent on select shows.  Check out tour dates here.

“Hi freaks! I’m proud we can finally announce the North American part of the ‘End of Disclosure World Tour’,” commented Peter Tägtgren. “It’s going to be great to come back again! Don’t worry it won’t be any visa problems this time either as I stayed in NYC this Summer. We’re looking forward to bringing our stage set from Europe, plus playing a lot of new songs and old songs that we’ve either never played, or haven’t played for years. Enjoy the new video for now and see you soon!”

Check out this video message from Peter:

Brazilian gods KRISIUN have posted their brand new video for “The Will to Potency” online.  The song comes off the band’s latest album, The Great Executioner, which is available now. Watch it below:

The director and producer of the video, Tommy Jones, comments:

“The band had originally contacted me to do a live video on the ‘Conquerors of the World Tour‘. We filmed every night live, however the day before the last show of the tour, we had a day off on a drive through New Mexico towards the last show in Texas. I had the idea of filming the band out in the middle of the desert because I love that area and always wanted to do a desert shoot. So I convinced the driver to pull over in the middle of nowhere at 9AM. We filmed for about 2 and a half hours out there, using a laptop as audio playback. We caught the attention of the Mexican Border Patrol who came to check out what we were doing. They sent about 3 SUVs out to check us out. Once they made sure we weren’t doing anything ‘too illegal’ they got a kick out of it and were taking pictures on their iPhones because they said in all their years, they haven’t seen a band set up in the middle of the desert.

“When it was all said and done, we filmed every night on tour, but it ended up that the majority of the video was filmed on that day off in the middle of the New Mexican desert in about 2.5 hours.

“It was a fun video, and I’m glad we got to do it this way, we all are really stoked how the desert stuff came out.”

SEPULTURA, DEATH ANGEL, KRISIUN, and HAVOK will be heading out on a North American tour this April.

“We are so excited to go back to North America,” commented SEPULTURA guitarist Andreas Kisser. “Last year was great but this time we have the new album Kairos out and people already know the new stuff. Plus, it’s the first time we are touring with our long time friends in DEATH ANGEL and our brothers from Brazil KRISIUN. Finally we have a chance to tour with a Brazilian band outside Brazil; a long time wish! So prepare yourselves for an amazing and historical tour. North America deserves some real extreme and intense metal! See you all soon on the RELENTLESS WORLDWIDE TOUR, DESTROY!”

We look forward to another strong year in 2012 in which we will celebrate our 10 years online. Cheers for all of your support in 2011! Radikult!!
END_OF_DOCUMENT_TOKEN_TO_BE_REPLACED

ABYSMAL DAWN have emerged from the Los Angeles underground in a relatively short amount of time. But like any young band, they’ve faced their share of adversity. Through tough times, the band pioneered by mainman Charles Elliot, have channeled those opposing energies through a creative and inspirational outlet resulting in the best album of the band’s career. Album number three, Leveling the Plane of Existence, has taken the band to the next level in every facet, songwriting, technicality, lyrically, and production-wise. APESHIT chatted with Charles regarding the album, his guitar playing, his new doom band, BEREFT, and more.
END_OF_DOCUMENT_TOKEN_TO_BE_REPLACED

A brand new song, “The Will to Potency,” off of KRISIUN‘s upcoming album, The Great Execution, can be heard here: 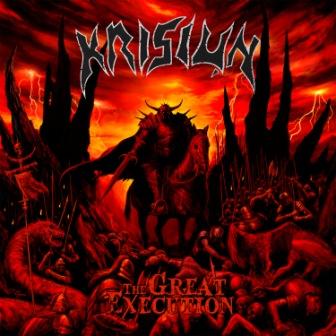