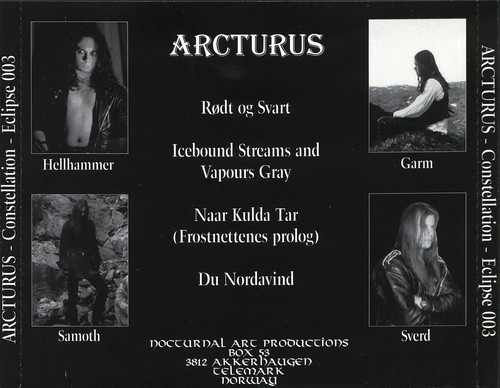 ZYKLON bandleader/guitarist Samoth has announced that the band will be going on hiatus. All of the band’s members will focus on their individual projects and priorities for the time being. Here is the band’s official statement:

“Returning from Japan marks the end of ZYKLON‘s touring activities for Disintegrate. Japan is always an awesome experience. We had amazing crowds, hospitality and, of course, lots of sake. Looking back on the general touring activities for Disintegrate, we’ve seen many of the same clubs and people, but also some new places and a lot of new faces, which has been great. We made it back to the states, even if only for a one-off festival, we played the Roskilde festival, which was really cool opportunity for an extreme metal band like ZYKLON, and we did a bunch of other European festivals, some smaller tours, etc. It’s been a good run, and a particularly interesting one as Trym, Secthdamon and myself have also done a bunch of big EMPEROR shows during the same timeline. There have been both pros and cons to that situation, but all in all it’s been very cool.

“As for future plans, I guess one could say that it’s a bit “up in the air” at the moment. Looking back there have been ups and downs during the years with ZYKLON. We’re not always an easy band to manage, as all members live in different cities and have multiple commitments on different fronts, thus it’s often hard for all the logistic and practical things to work. This situation has especially come more into focus in the last year or so, where it has become harder and harder to get the band together when needed, with the spirit and excitement that one expects from a band like this. Basically, I don’t feel that we as a band have the fire needed to start working on a new album right now. Therefore ZYKLON are taking a break. This is a good time for us to do so. We have completed a good run of shows around the world for our latest album; we have completed all our contractual obligations with Candlelight Records (with success I must add, as Candlelight have treated us well, cheers mates!).

“Also, the ‘terror-twins’, Destructhor and Secthdamon, have plans to go for it with MYRKSKOG, and will hopefully finally take the actions needed to complete their new, long-delayed, album. I truly hope they will, because this is the time to do it and I know the fans have been waiting for years, and judging from the pre-production material I have heard, it will be massive statement of intricate and brutal death metal. Trym is also working on a new album with his other band, PAGANIZE, at the moment.

“Personally, I have a bunch of material written and will keep on working on that over the winter, and basically take it from there. What the future will bring I cannot say at this point. All I know is that we’re all active musicians and have no intentions what so ever to stop our mission of METAL!!!

“On other fronts, there are plans for an official EMPEROR DVD release. There’s a lot of cool material to be reviewed, mixed and edited. There are also things happening on my label, Nocturnal Art, this fall with new releases from MANNGARD, IN BATTLE and LIMBONIC ART. Make sure you log into the official Nocturnal Art, ZYKLON and EMPEROR Myspace profiles for updates.