The title track follows with some dainty folk singing and strumming before arriving at a soothing yet not particularly inventive “solo.”
END_OF_DOCUMENT_TOKEN_TO_BE_REPLACED 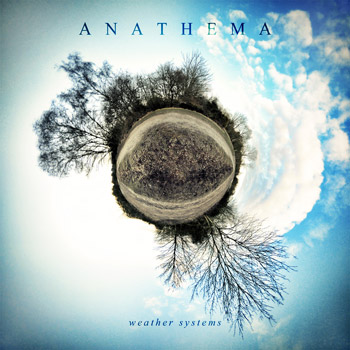 Legendary doom/prog band ANATHEMA are set to release the highly anticipated We’re Here Because We’re Here on June 7th on The End Records. The album’s release coincides with the band’s first ever North American tour. Dates in support of BLACKFIELD kick off on May 18th in Washington, DC.

We’re Here Because We’re Here perfectly blends alternative, rock, and prog, and marks the 8th studio album from a band with such a natural sense of melody, seething power and lyrics that they enlighten and inspire.

A special, limited edition deluxe edition will include three bonus tracks, 7 inch with two unreleased tracks, and a DVD 5.1 surround version of the album, along with the stereo version, both mixed by Steven Wilson of PORCUPINE TREE.

ANATHEMA, who are currently touring Europe with PORCUPINE TREE, have posted a new song, called “Angels Walk Among Us“, for download <a href=”http://surrealm.net/anathema/angelswalkamongus.mp3”>here</a>. The track is from their forthcoming new album, tentatively titled Paradigm Shift. Read more about their album plans here.

ANATHEMA‘s Danny Cavanagh has issued a lengthy update on the band’s upcoming plans, which include a European tour with PORCUPINE TREE and tentative plans to release a double-album entitled Paradigm Shift. The update reads as follows:

“PORCUPINE TREE have kindly asked ANATHEMA to support them on their full European tour in the autumn…this tour is still in the planning stage and will cover a lot of territories.

“ANATHEMA have decided that – rather than rushing into the studio to finish the album in time for the tour, (and not being able to work with the producer we would like) – it will actually benefit the new songs to play them live BEFORE recording them.

“So you can expect to hear songs like ‘Angels Walk Among Us‘, ‘Paradigm Shift‘, ‘Hindsight‘, ‘Get Off, Get Out‘, ‘Lightning Song‘, ‘One Day‘, ‘Summernight Horizon‘, ‘Further‘, ‘A Simple Mistake‘ and others on the tour with PT…

“Our new American manager is helping to put everything in place for us to record and release this ambitious music. He is negotiating deals in the USA and advising us on our best way to go. the response from record companies has been very positive.

“We intend to record over 80 minutes of music [and] at least 14 songs. The idea AT THE MOMENT is to release a double album called simply…Paradigm Shift.

“Again this not not confirmed, PLANS CAN CHANGE.

“A double album WILL NOT mean it will be a very long album…it may only be two groups of seven songs…split over two CD’s in order to be easily digested by the listener. It definitely will not be a self indulgent album. It definitely is not a concept album.

“Themes of life, healing and unity will run through some of the songs…

“The recent shows we have played this year have been great. We had some great nights, some great audiences and great laughs. Thanks for everyone who helped make it happen. Special thanks must go out to Derek and Alex at the agency, Mick Reed, Milly Evans, Raymond, Ian, Loz and Hans for making it all work.

“We have loved playing. We look forward very much to introducing this intense, passionate new music to the public on tour with PORCUPINE TREE. we then look forward to recording what i personally think will be a wonderful record after the tour. It is the first album we have made that will be truly complete. It will change lives. Hopefully beginning with ours.”